Coalessence was originally founded by Becca Perry and Karly Loveling in 2006, who facilitated dances on Friday nights in Upstart Crow Dance Studio. The dance moved to a studio space on 18th & Willamette, then the Eugene School of Ballet (where Zan joined as a third facilitator), and then to the Tango Center. In 2008, Becca and Karly passed their roles as facilitators to Grace, Paul, Amanda, and Sara.

Soon after, the Tango Center closed, and with only a handful of regular dancers attending the Sunday morning dances, the new facilitating team decided on a more permanent move to the WOW Hall. During this transition, Sara moved to Hawaii to further develop her 5 Rhythms community practice, and the remaining four facilitators set about to dream up a dance space filled with moving, happy bodies.

Each Sunday brought in a few more people, and so did each Sunday after that. In response to the growing need and interests of the community,  the facilitating team extended the Sunday morning dance an additional half hour, while adding an additional dance at the Vet’s Club on Tuesday evenings. in 2018, After Several years at the Vets Club on Tuesdays we consolidated to The Wow Hall for both Sundays and Tuesdays

What started as a dance space with as few as five dancers attending, has now grown into a vibrant and supported space with sometimes up to 100 people dancing together.

And the community just keeps on growing.

We are pleased to welcome Joanna Cashman, our 7th and newest facilitator, to our core team. Joanna has been a devoted and passionate dancer,  DJ, dance performer for many decades. We’re delighted by her energy, insight, and creative spirit. It is a collective effort to hold the vision and evolution of Coalessence, and we hold our roles as stewards with full and open hearts. It has been a surprising and delightful ride, indeed!

Blessings to all of you who came before us, lit the way, showed up, danced, and continued to support us and our community in all the ways that you have throughout the years. Blessings to the Dance. 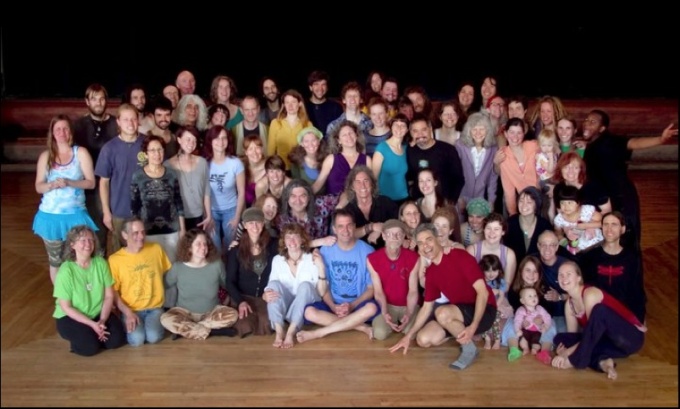